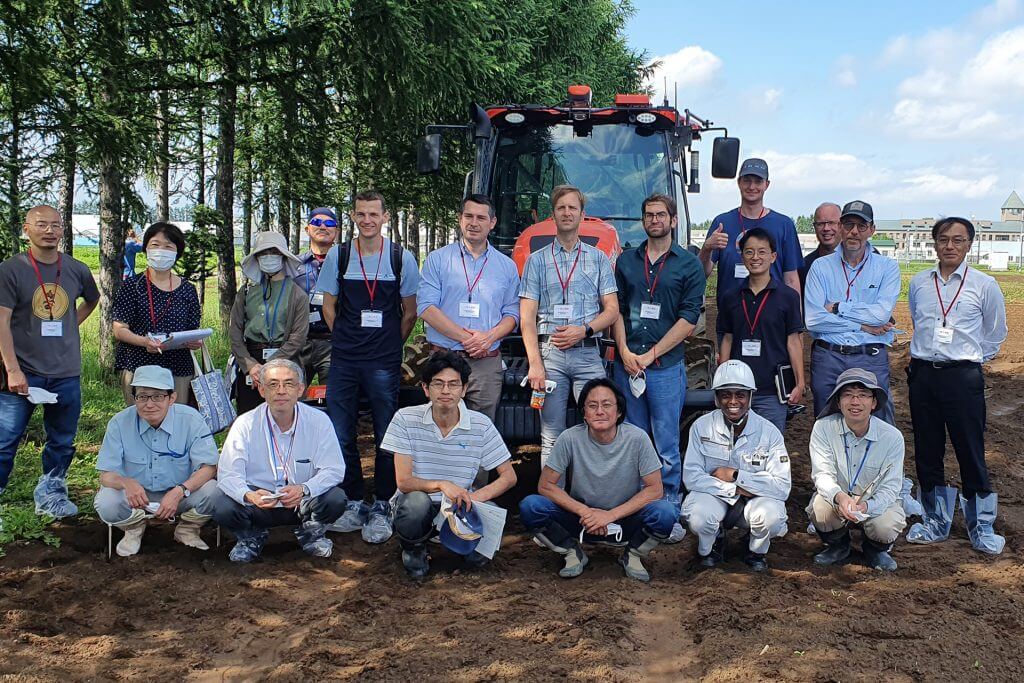 The TTADDA project was launched in 2020 and its full name summarizes the goal of the project which states: ‘Transition Towards a Data driven Agriculture, for collaboration between Japan and The Netherlands on potato’.

Unfortunately, within one year of launching the project, we were affected by the severe effects of COVID-19 causing significant impact on the execution of the project i.e. lock-down restrictions, working from home, leaving us with the only option of video conferencing and e-mail communication as the only means to exchange ideas and results between the consortium partners. However, this did not deter our efforts and determination and kept the project running. Field experiments were carried out in 2021 and 2022 in Japan as well as in The Netherlands and data was collected. Miraculously, last summer, the Dutch TTADDA team visited Japan, and it was great! We had live sessions, inspiring discussions, vivid workshops, great lunches, incredibly delicious dinners and late-night drinks and discussions. The picture below, showing the team in front of the autonomous Kubota tractor on the fields at the Hokkaido Agricultural Research centre, Memuro Research Station illustrates the high energy level we reached from this live exchange. 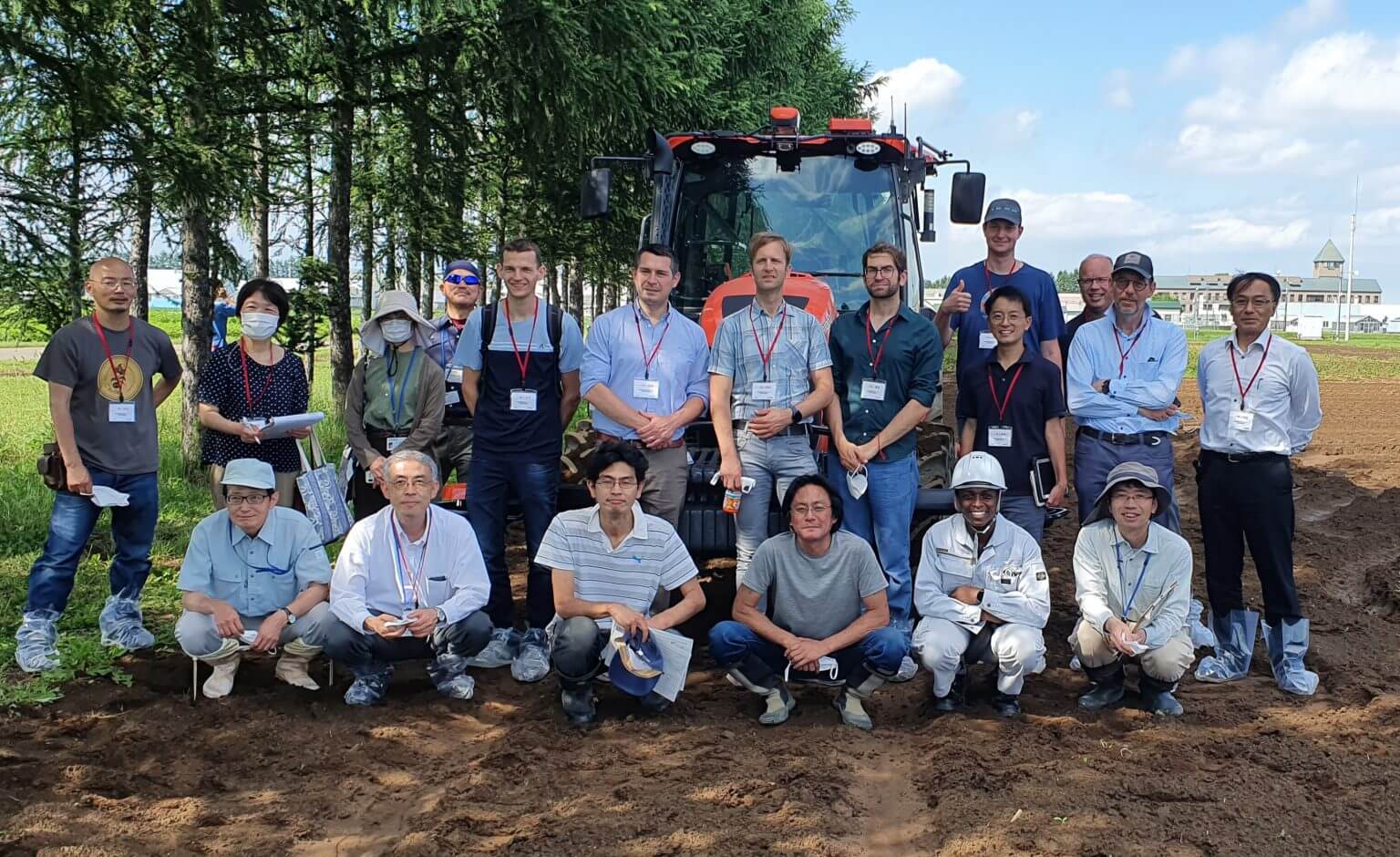 Overview of the TTADDA research visit

This article offers an overview of the activities and insights collected during the TTADDA team visit to Japan from July 17th till 23rd 2022.

We started in Tokyo, where we visited the NTT Training centre. An impressive demonstration in a tomato greenhouse, prepared by NTT Agritechnology, showcasing a 5G camera network in which live data transmission was realised at extremely high bandwidths. Next, we discussed with Daiko Endo, Takuya Murayama, and Yoshikazu Kusumi for the TTADDA project how NTT can team up in the TTADDA project on the topics of satellite image data processing, AI (Artificial Intelligence), crop growth models and sensor networks.

At the headquarters of NARO in Tsukuba nearly the entire consortium of TTADDA (NARO, imec OnePlanet, Wageningen Research and Kubota) came together. Furthermore, the Dutch Agricultural Attaché Denise Lutz, the Agricultural Advisor Yuko Saito and Oost NL representative Belqis Askaryar joined the meeting. In Tsukuba we visited one of the most advanced fully automated seed banks in the world. Followed by a workshop with a lab tour on root phenotyping at the Rootomics lab from Dr. Yusaku Uga, where we exchanged ideas on automated screening of large numbers of plants. Finally, Rick van de Zedde gave an overview of the brand-new Netherlands Plant Eco-phenotyping Centre (NPEC) that has been built in the last three years and has been officially opened on the 26th of September 2022. 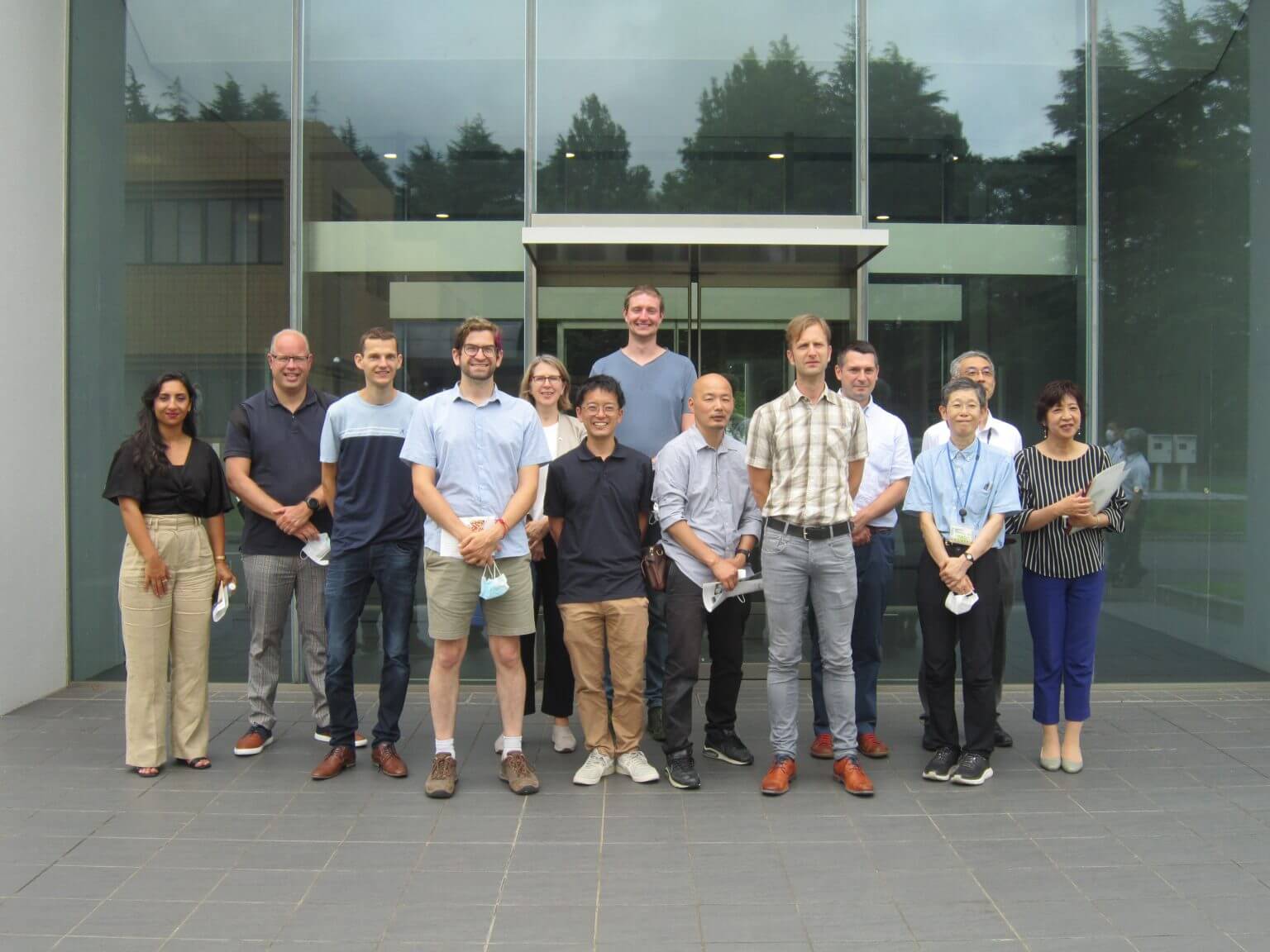 The project meeting continued at the Hokkaido Agricultural Research Centre (HARC), where Dr. Kenji Katayama, an expert on potato breeding (NARO) shared with us insights on optimisation of yield and quality through breeding in Japan. He also explained how to work on resistance against potato diseases caused for instance by nematodes, potato virus Y, late blight, common scab. A key insight was that the Japanese consumer is fond of the table potato variety Irish Cobbler (Danshaku), which was introduced in the market already more than 100 years ago. New more robust varieties have been developed, but they are facing adoption issues by the Japanese consumer. This is a big concern, as climate change is destabilizing crop yields more and more in recent years. 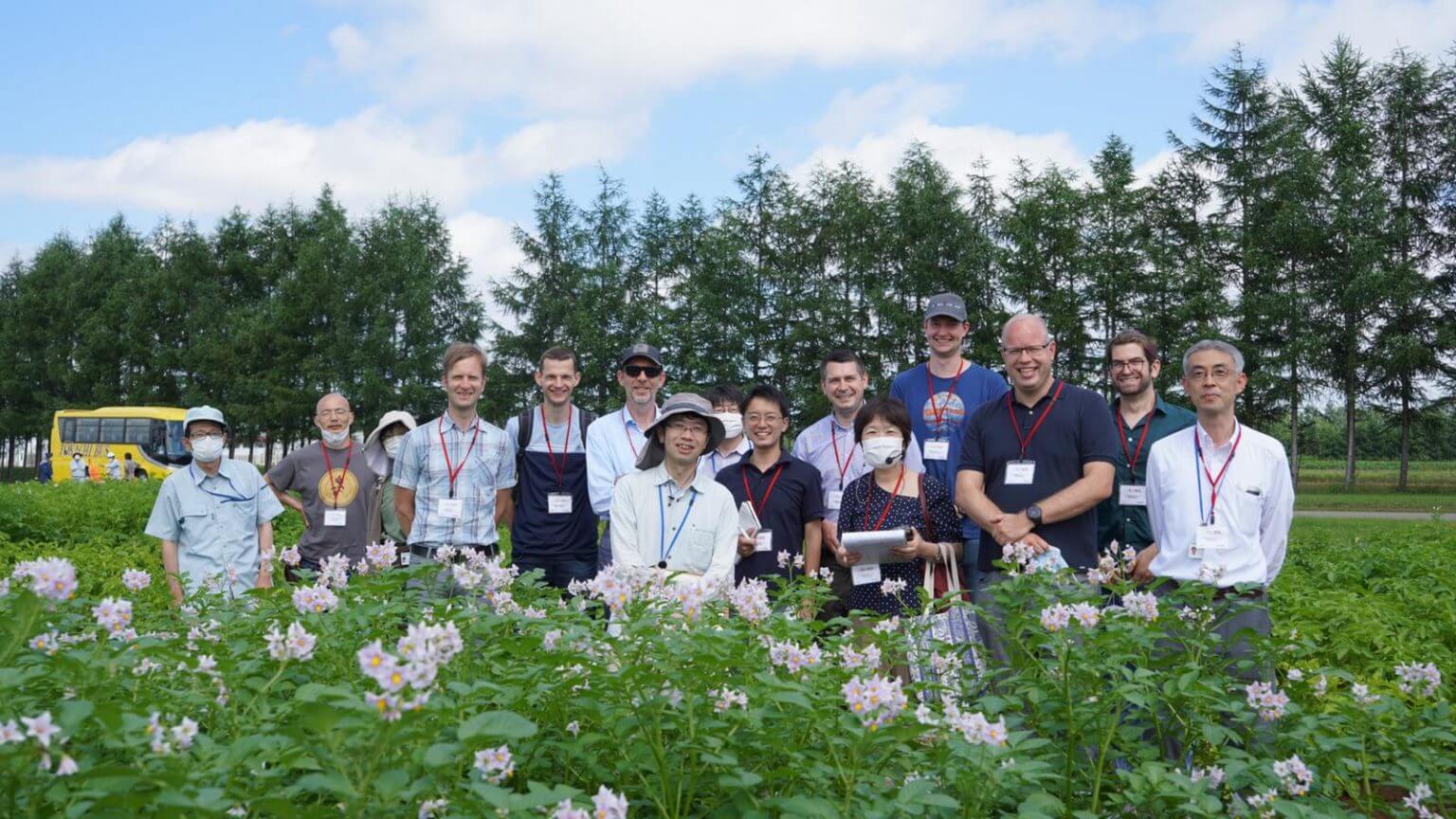 Dutch TTADDA team and NARO researchers at the potato trial field in which multiple varieties are tested in TTADDA experiments carried out at the Hokkaido Agricultural Research Centre (HARC).

NARO experts showed novel and efficient farming practises developed at HARC using UAV data to monitor crop development. DJI Phantom quad-copter drones (SZ DJI Technology Co., Ltd), as well as a fixed wing eBee drones (AgEagle Aerial Systems Inc.) were used, where the latter can fly longer sessions on large fields. On the field we learned and experienced one of the big differences with respect to growing potatoes in the Netherlands and Japan, as the soil characteristics due to the impact of volcanoes is completely different from the situation in the Netherlands. The soil in Japan is called Andosol soil, which is weathered volcanic ash, easy to crush, and it has a considerable risk of wind erosion, because of the low density. The soil penetration resistance is small, and it easily deforms after rain. Underneath there is a clay layer that stops water from going through. The basis is acidic soil with a total absence of earth worms, and not many earth organisms.

Heavy field work is done by a fully autonomous Kubota tractor (in picture). This tractor has 2 3D lidar sensors in the front and 4 RGB cams looking around, AB line driving and it is able to autonomously carry out smart turns on the field. Modelling is done in the smart farming cloud application WAGRI. Koen van Boheemen presented the Dutch Smart agriculture tool FarmMaps and Marcel Zevenbergen outlined the new research centre imec OnePlanet.

And then the magic happened: We levelled as a project team on the research challenges formulated in the TTADDA project, and in parallel brainstorms and discussions became lively and focused: 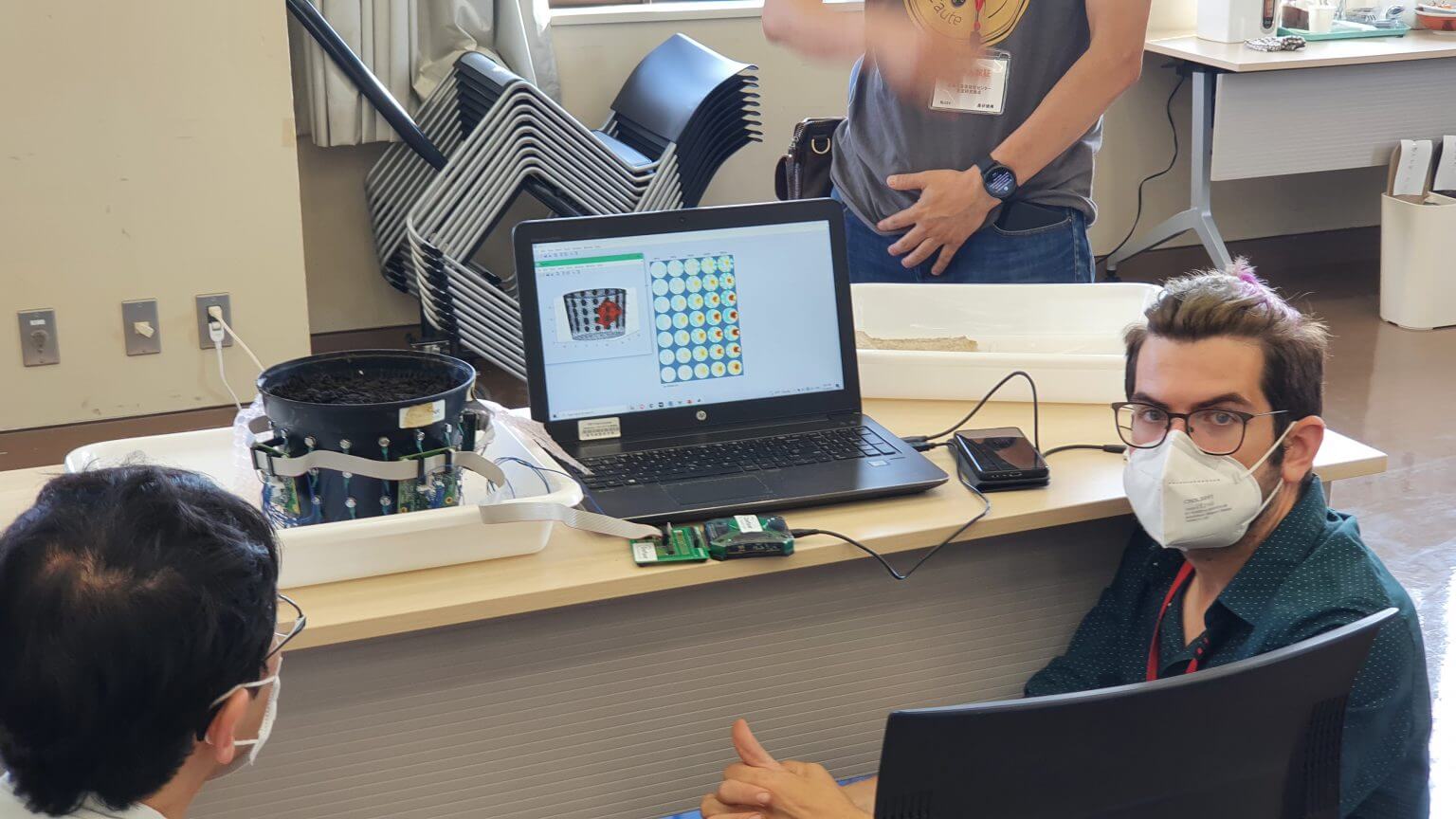 Joseph Peller (WP2 leader in TTADDA) next to his ‘bucket’-sensor demonstration. 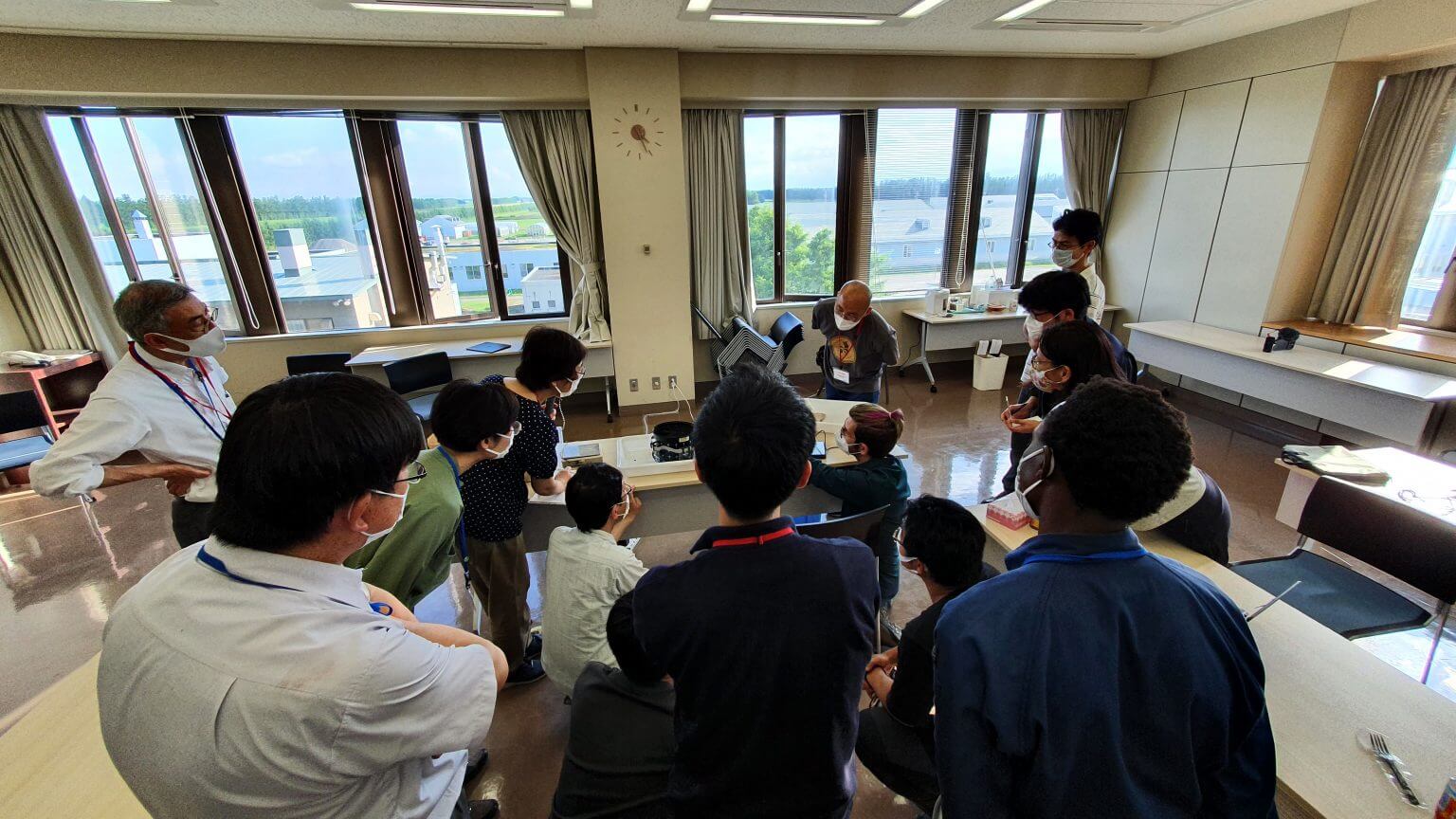 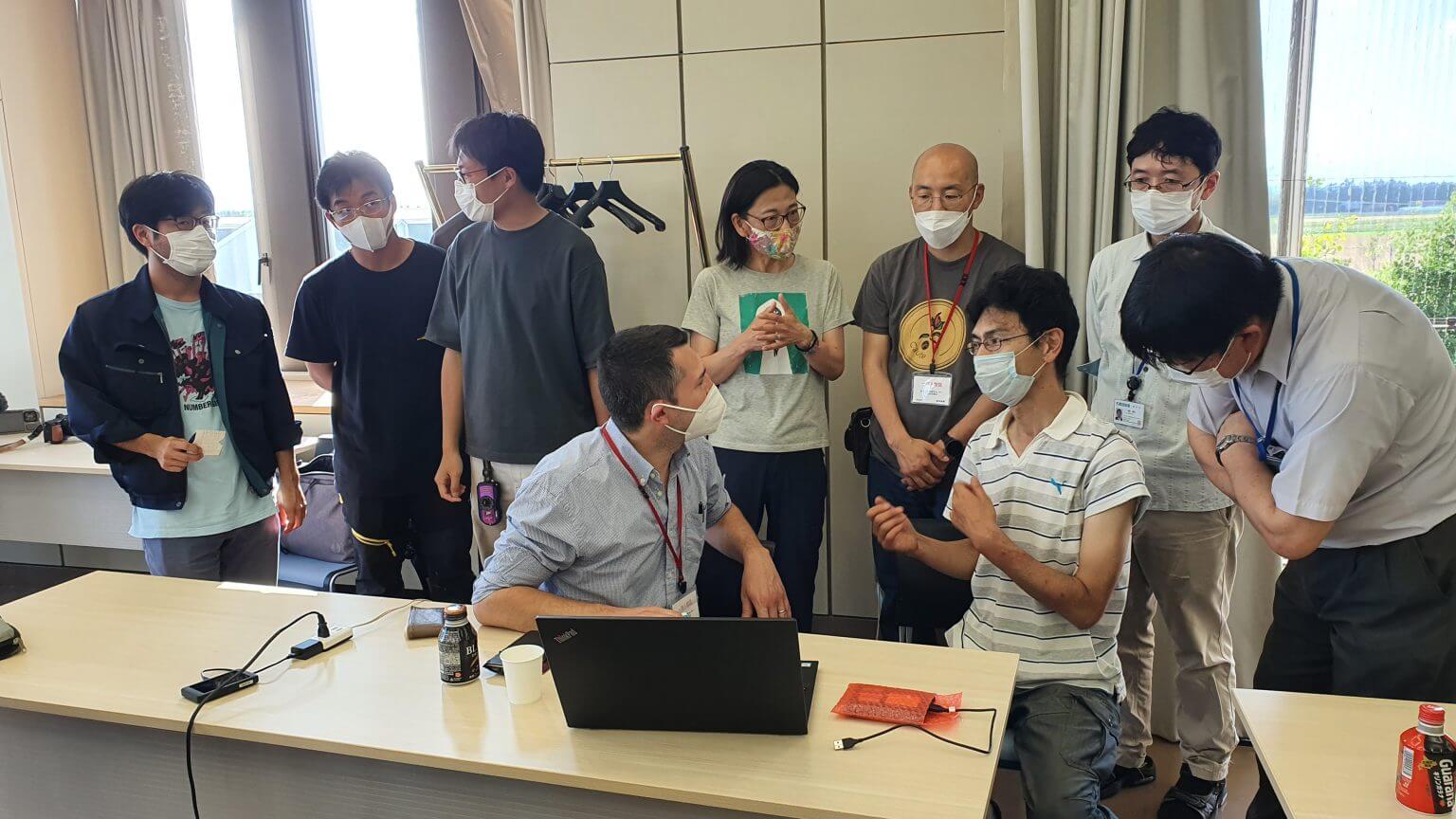 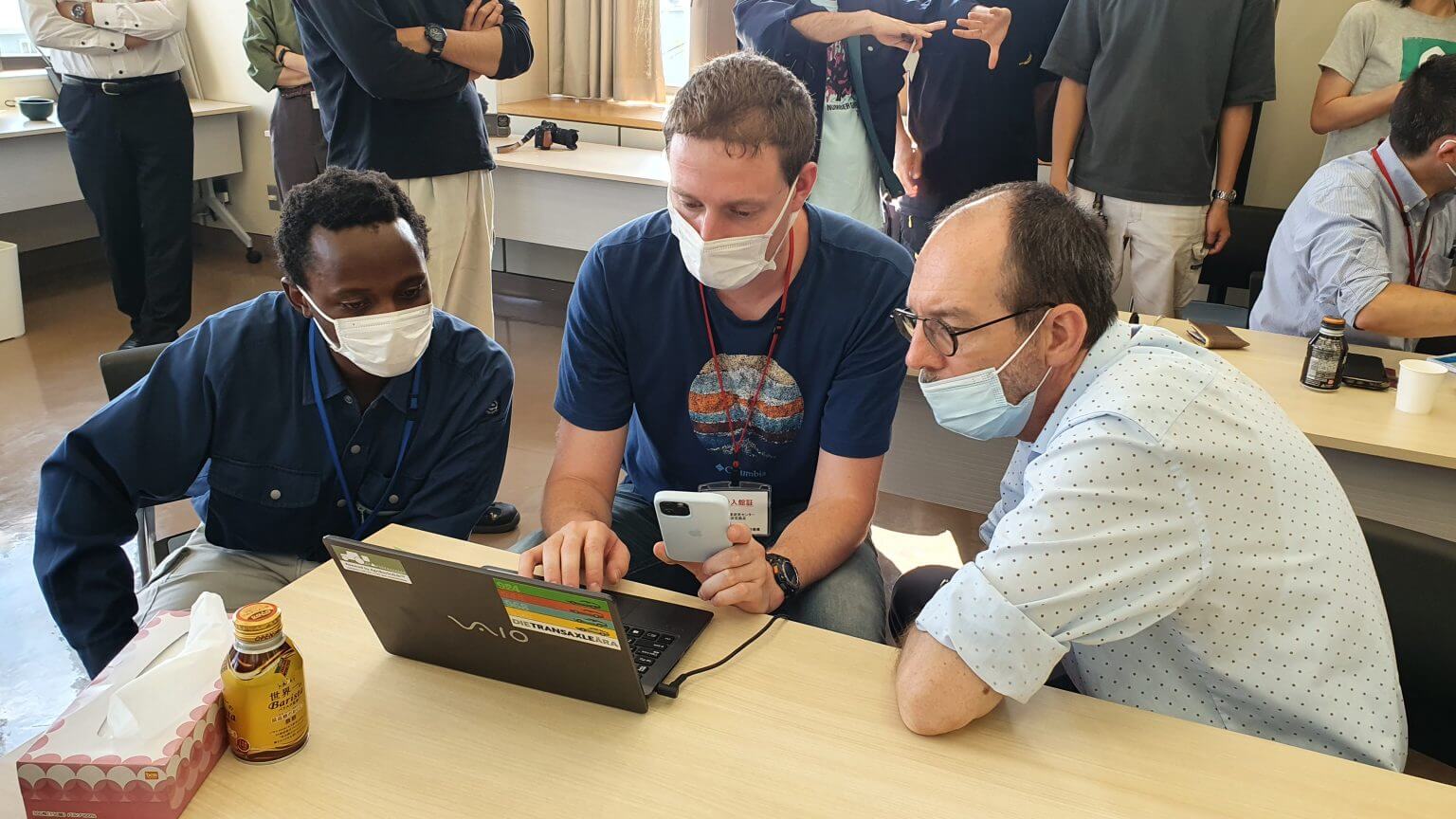 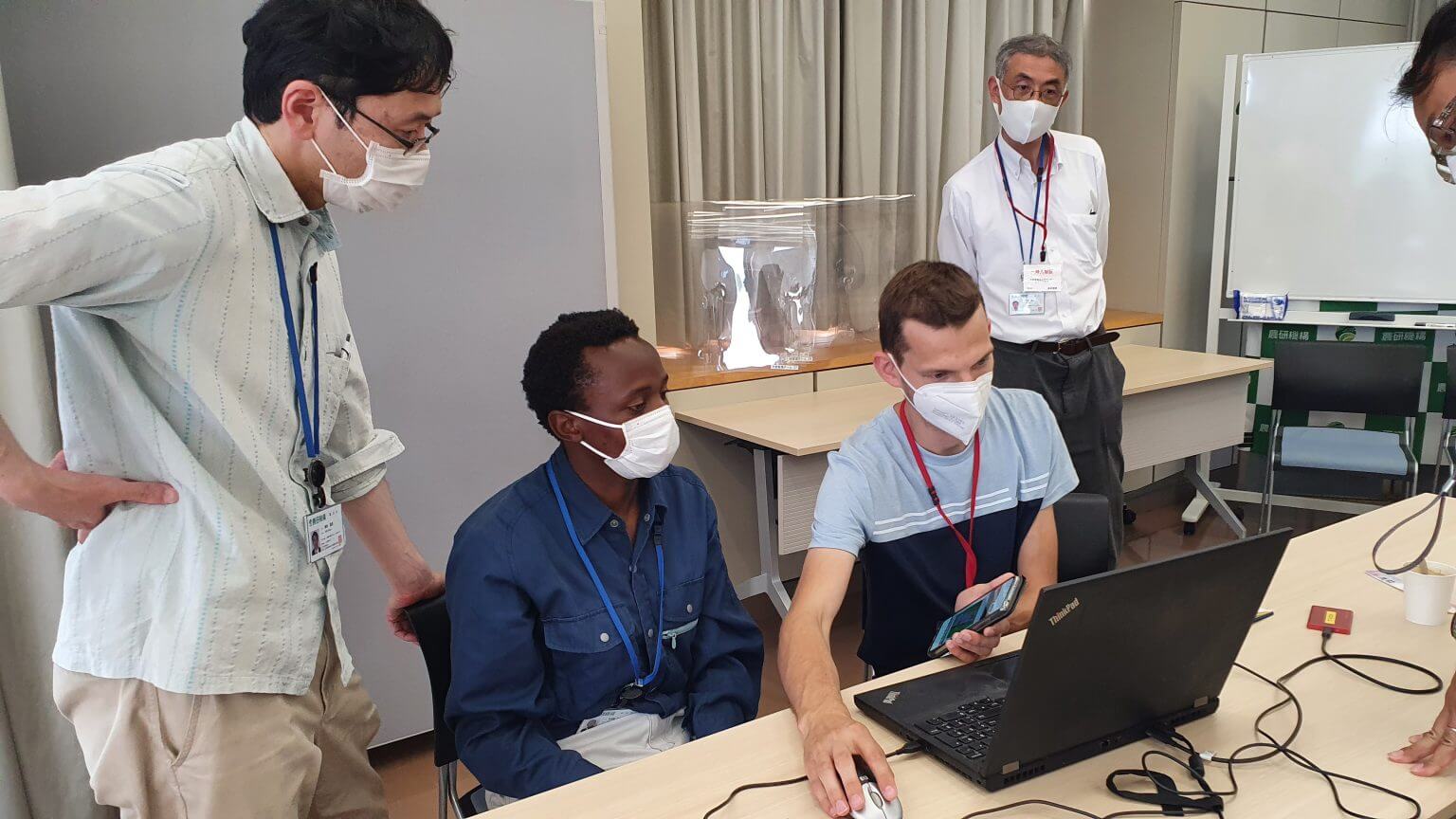 Bart van Marrewijk (WP1 team member in TTADDA) discussing with Njane Stephen Njehia (NARO) which information to extract from data of the NARO UAV data from the field experiment at HARC using advanced deep learning and other AI techniques.

The next day we visited a large and modern mixed farm on Hokkaido where farm manager Numakura Takefumi explained how data driven tools, such as Agri-note is used for registration of scheduled actions. Mr Takefumi runs this 132-hectare farm with 2 persons and 10 seasonal workers. They grow sugar beet, potato, gras, and combine this with cattle. For the Dutch it was fascinating to learn how the farmers in Japan deal with snow. The snow is flattened to quickly get rid of cold in the soil with connected car tires on a rack behind a tractor. Mr Takefumi told us that he is worried about the future, as the prices of materials and feed are rapidly increasing, while quality is key to meet the high standards of the Japanese consumer. Next to that the lack of labour in this region of Japan is a sincere concern.

The next stop was the storage facility of Calbee Potato where we received a complete overview by Mr Mori of all their storage facilities. It was surprising to learn that personnel had to walk through rugged cages around the potato boxes packed on top of each other in the large rooms. We could not fathom the reason, until they explained that these prevent boxes falling on the employees in case of an earthquake.

The TTADDA team at Calbee Potato, with a guided tour by ‘Mr Potato’ Dr. Mori himself (at the centre standing while holding his jacket).

In the afternoon we travelled to a large-scale sorting and state-of-the-art storage facility of JA Shikaoi, operational since 2019. Dutch equipment is shown in the large storage rooms for seed potatoes (Mooij Agro), and in the main hall a sorting system from the Japanese company Shibuya Seiki Co. was demonstrated. This large sorting line was controlled by just one man. Ten conveyor belts in parallel are able to sort five individual tubers per second in which RGB, NIR (near infrared) and SWIR (Short Wave Infrared) cameras inspect each tuber. For scab detection an AI-algorithm is implemented. 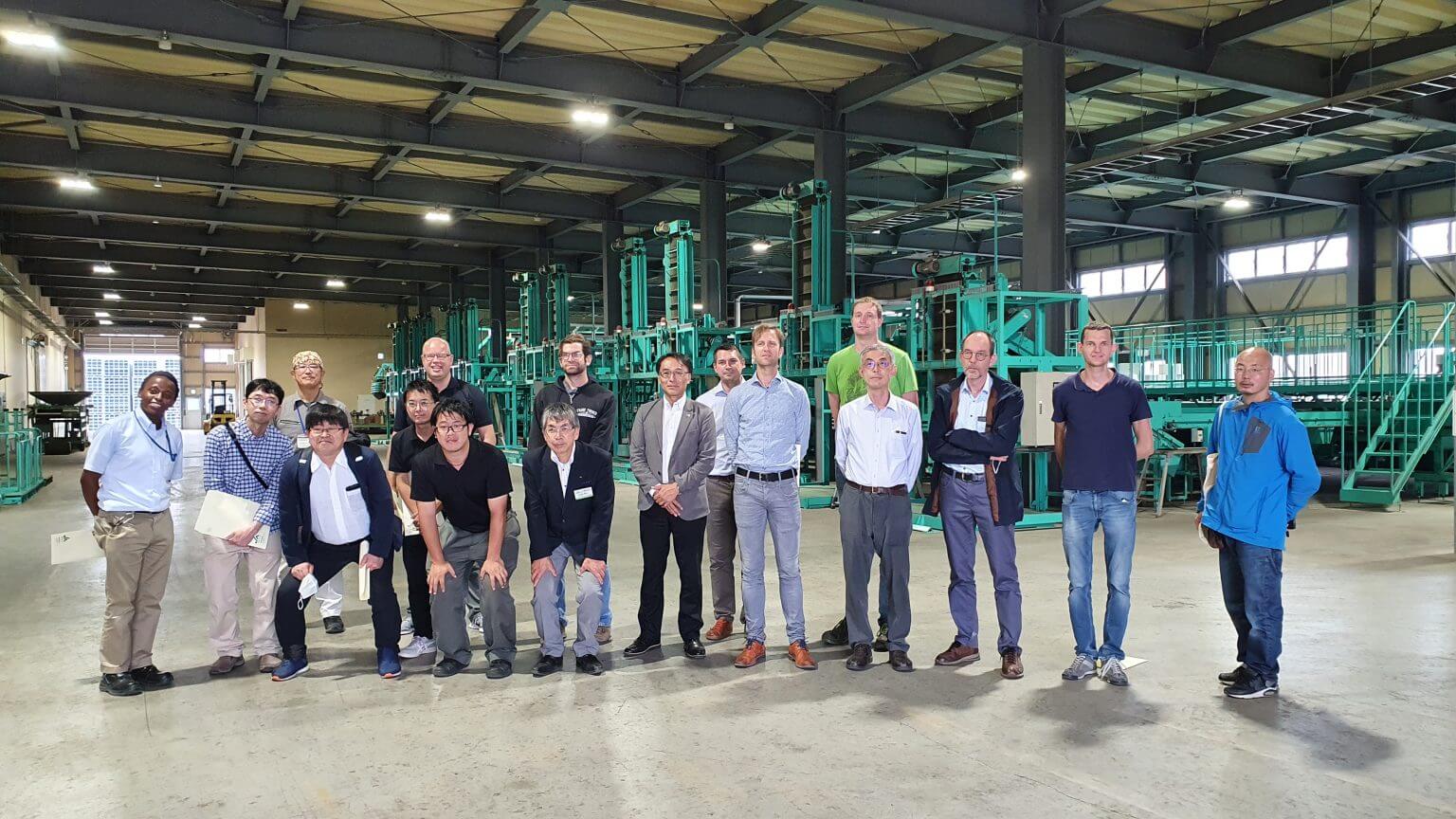 TTADDA team at JA Shikaoi with an impressive tour by Mr. Imada and Mr. Takada.

This week of live meetings boosted the interaction between the TTADDA partners. In the upcoming months and in the upcoming final year of the project, we will strive to build a solid network of Dutch and Japanese partners to enable us to continue to work on the transition to a high tech-driven, circular agriculture to boost the productivity for a data-driven potato production system as well in the Netherlands as in Japan.

There are no upcoming events at the moment.